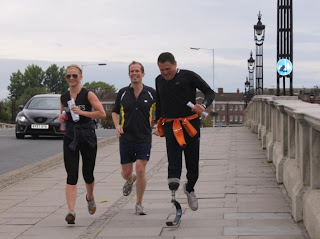 Running towards the Hampton Court with Chris and Michael

I am not a long distance endurance athlete - not any more. Actually after 30 miler I did last year, I swore never to run more than 10km in one go. And yet, last Wednesday I ran 25 miles and thoroughly enjoyed it - all thanks to one AMAZING MAN - CHRIS MOON. In aid of Barnardo's (Believe In Children) projects, Chris took on a challenge to run 1000 miles within 30 days across the UK.

Last Sunday, my friend Ewan, who managed the 1000 challenge, asked me if I would do a leg with Chris on Wednesday. I didn't hesitate for a second and jumped on a chance to meet this remarkable man. I wasn't disapointed.

So who is Chris Moon? Chris is a former army officer. He's survived kidnap by the Khmer Rouge guerillas in Cambodia, was threatened execution, worked for a charity clearing landmines in Asia and Africa, was blown up in a remote minefield in East Africa and lost his right leg and lower right arm. Chris survived against the odds and ran the London Marathon just within a year of leaving hospital.

Since then he has completed a number of ultra endurance events, including the Marathon des Sables (137 mile race across the Sahara dessert) and Badwater the 135-mile continuous ultra through Death Valley to the mountains.
He's taken parties to climb Mount Kilimanjaro and run the length of Cambodia to raise funds for charities assisting disabled.

Ewan has arranged for me to meet Chris in Guildford. The plan was to start running around 11 am and reach Shepherds Bush in London by 4.30pm. Sitting on a train to Guildford I had mixed feelings. On one hand I couldn't wait to meet Chris, on the other I was nervous and worried I wouldn't be able to complete the whole distance. All the worries disapeared the moment I started talking to Chris. He proved to be an incredibly charming man with a wicked sense of humor. 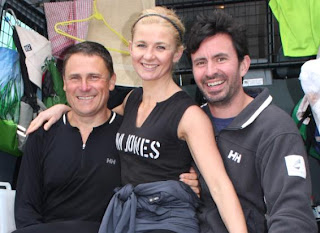 The run was FUN! When I say fun, it doesn't mean it didn't hurt. Last 3 miles were really hard. Not being used to such a distance I must admit I did struggle and only Chris' presence kept me going. I remember when we met our support crew in Kew, the only thought I had in my head was "Please dont give him (Chris) any more sugar, he will speed the pace up again"... Well... and he DID!

Chris was really happy by the end of the run, he said that his pace was much faster than the day before. He told me it was thanks to running with us - good runners. Two guys, who run with us were definitely good runners - Michael, triathlete from Canada, who was supposed to run with us only to Hampton Court but continued till Kew (Mike you are a hero! :) ) and Rob - a marathon runner, who joined us in Hampton Court. Me ... I wouldnt even call myself a runner, and definitely not a good one.
I just said - ... if you knew what was going through my head during the last miles... I just kept going because I had you by my side and would be dead embarrassed if I stopped. Thanks to Chris, I didn't give up. I was proud to wear my Gym Jones t-shirt and I every time I looked to my left I saw a MAN running next to me, who represents all I value in Gym Jones so much.
Chris Moon is an amazing person, one of those people, who when you meet, you know you will remember forever. He is a charismatic, courageous man with incredible physical & mental strength plus he made me laugh to tears.
CHRIS IT WAS AN HONOUR TO MEET YOU AND JOIN YOU IN YOUR JOURNEY. I KNOW OUR PATHS WILL CROSS AGAIN ON MANY OCCASIONS.
To find out more about Chris Moon, visit his website www.chrismoon.co.uk
Chris has done an epic thing for a great cause. Support Barnardos, any donation can make a change!
http://www.barnardos.org.uk/donate/donate_chris_moon.htm
Ewan Ross - my dear friend :), thank you. Ewan will be starring in a new movie with Sean Bean and Danny Dyer. I believe the premiere is in January 2011. Ewan's story is worth a full blog post. Here is a short article about Ewan from the Independent.
http://www.independent.co.uk/arts-entertainment/films/features/onward-thespian-soldier-swapping-bullets-for-broadway-1297598.html
Sabina