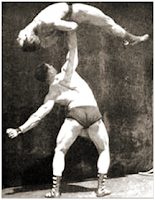 
"Despite the difficulties and frustrations of the moment,I still have a dream."
- Dr Martin Luther King

My Journey Into Strength Pt 8: Road To Recovery


So I had strained the flexor muscles in my forearm, plus fractured the small bones in my wirsts in both hands. I had limited range of movement, and that which I did have often caused searing pain. I could not put weight through my hands. Getting out of the bath had evolved into an interesting game, as I could not use my hands to leverage myself out. I even had difficulty holding simple things, such as a frying pan.

Still I attempted to train. As I was unable to extend my wrists, I could not get under the bar to squat. I substitued back squats for Zercher squats. I could not hold a barbell, or dumbell, but I could manage knuckle press ups. I duly modified the tempo and leverage for great effect. For pulling movements I strapped some weight to my waist and knocked out some Gironda pull ups. Sprints became my staple diet.

Even though I was still able to train, I could not manage the intensity that I was used too, or the same exercises. My strength fell off, I lost 4kg in a short space of time. It was clear that I wasn't going to compete at the Strength & Power Meet, or the Powerlifting Competition later this year. Each gym session was becoming frustrating, and depressed me more. Physiotherapy treatment was yeilding some results, but not at the speed which I had hoped for. While my general demeanour was a happy one, now and again my mind would drift into a dark place. That was until a friend of mine taught me an invaluable lesson. Perspective.


In mid summer Katarina Helcmanovska was involved in a car accident. She was exiting a round about on her bike, when a taxi driver thoughtlessly ploughed into her, instantly breaking both her legs and collar bone. Katarina was laid up in hospital for about 10 days for an operation and then discharged. When I spoke to her about the accident, she was remarkably up beat and said "Well, you know it was the best possible outcome really" Bemused I replied, "How so?" Kat didn't waste any time in answering, "At least I didn't get any head or spinal injuries, it could have been a lot worse." It stopped me dead in my tracks. "Wow" I thought. She's got the right mindset.

Katarina went further in humbling me, when about a week later she arrived at our Full Throttle Fitness Class. She had travelled from East London to South London, covering two bus rides and a tube journey all by herself. What was even more remarkable was the fact that she had only one functioning arm, and one functioning leg to propell herself in the wheelchair. Resolute, I decided to abandon any thoughts of self pity, and re-establish an effective rehab and training program.

I incorporated indian club training to complement the joint manipulations, establishing range of movement, tissue and joint strength, plus specialised grip training. I gradually began introducing bench press with dumbells, and light back squat, plus deadlifts. I was making progress. While my deadlift is still 15kg off my max, my squat 25kg off and my bench 30kg off my top end lifts, my enthusiasm for training is growing again and my outlook is brighter. By Christmas I aim to have my base levels back, with a view to being Powerifting, "competition ready" come February / March 2012.


HOW Can This Help You?

Step 1
Treat any injury as soon as possible.

Step 2
Establish a treatment plan with a suitable professional to get you back on track.

Step 3
Stick with the training plan - give it time to work.

Step 4
Guard Your Mind - Be realistic, but remember it could be worse, be grateful.Healing takes time.

Step 5
Modify your training, and accept that it will be a "maintenance" phase.

I hope that you have found this useful, especially if you are stuggling with injury. I would like to thank Katarina Helcmanovska for her awesomeness and inspiration, which is often understated, but always present.

In the final Journey Into Strength, I will be looking at exercise programming for strength athletes who are DRUG FREE and like to lift RAW.

Cj, I'm honored to be part of your strength journey :)
There are so many exercises to do that unless you can't move at all, there is always something to do. Plus it's good to change the training from time to time. That's why I enjoy the Full throttle fitness class so much as it's different to what I'd normally do and as well I like the competitive environment of other participants!!!

Cj, you'll have your strength back before I'll be able to jerk 8kg :), you'll see

Thanks Kat! you're an inspiration as always and your energy is always appreciated in class.

You'll get back to jerking soon enough - in the meantime you'll just have to smash the snatches instead!!