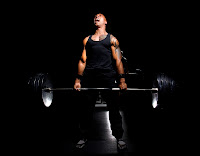 
There is a thin line between mental toughness and stupidity, and at Body Power 2011 I clear crossed the line with wreckless abandonment, destroying any chance I had of competing in The Strength Power Meet 2011, or the British Power Lifting Open. Here's what happened.

At the Body Power Expo, central to our space was a rig supplied by Beaver Fit. Similar to the Beaver Fit Commander FTR (pictured below). 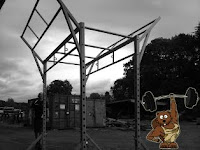 A few of us had come up with the idea to do explosive pull ups form the bottom bar to the top of the wing in one move. After a few attempts, I managed to nail the trajectory, and executed it effortlessly drawing attention from onlookers, who watched a few of us mastering the move in awe.

As the day continued, I demonstrated the War Machine, delivered Kettlebell Workshops with my good friend Matt Whitmore of Fitter London, plus a body weight demo with Legendary Coach Martin Rooney to the thousands in attendance. The show had come to a close and a few of use were shutting down the stall, and were playing about on the rig. Someone asked to see me to the explosive pull up to the top bar as it was quite some angle (the top bar was about 11 - 12ft high and at a 45 degree angle to the lower bar of about 7ft). I set my self into position and exploded up, I felt the tips of my finger grab hold, then all of a sudden I was falling backwards, legs in the air watching the bar slip away into the distance. I was falling, in that split second I realised I had to break fall and tuck my chin in as I was about to hit solid ground.


I slapped the floor on impact to disperse the force. I lay there flat on my back, looking up at the bar bemused. What just happened?! I had been doing this all day.

I did not realise how fatigued I was. I had been training at a sub maximal intensity all day, but did not recognise the impact on my performance.

Partly in disbelief, and mostly being the stubborn guy that I am, I promptly got back up and attempted the explosive pull up again.


This time I came hurtling towards the ground, and executed a breakfall again. On- lookers winced and turned away. My friends encouraged me to quit.

I attempted the explosive pull up again, to the same result. I smashed into the unforgiving hard ground of the expo. Something didn't quite feel right. Legs splayed in the air, laying flat on my back I finally listened to the voice inside my head which told me "You better quit this one Cj before it gets real ugly."

I didn't check myself properly for injuries. I continued packing up the stand at the expo, I even went out for dinner with The Fitter London Crew, Iron Mac, and Jonathan Lewis. Later the following day the extent of my injuries soon became apparent when I could not extend my wrists pain free, hold weighted objects or put pressure through my hands. I was later to discover I had fractured the small bones in both hands.


WHAT Can You Learn From This?

There were a few critical mistakes that I made, as I previously outlined, attempting to execute demanding feats when fatigued, not listening to my body or those around with a better vantage point so that I could see the bigger picture, and not checking my injuries properly after an accident. These are things that if brought to the fore front of our awareness, injury can be easily avoided. Mental and physical fatigue is the domain where injury and "accidents" happen.

A key thing that I failed to realise at the time is the impact that accident would have on my training and ultimately my goal. Remain focused and don't be swayed or distracted from your aim. Something as trivial as the explosive pull up to the top bar (which in the grand scheme of things wasn't that important) ended any chance I had of competing, and became significant for the wrong reasons.

The accident happened in May, and its now September, I've only recently began to train in earnest as was limited in what I could do. In the next entry I will look at HOW I worked around my injuries, WHAT I did to refocus after feeling sorry for myself (briefly)and the importance of getting specialist help when appropriate.

p.s If you haven't had a chance yet, my homeboy Matt Whitmore over at Fitter London has been documenting his Journey into Strength and unleashing his Wild Physique. Its an inspiring and thought provoking read. Check it out here.
Posted by Coach Cj Swaby at 06:25