How Wholefoods Supermarket Got It So Wrong 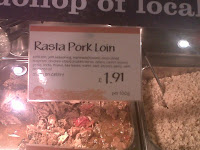 So it's a monday afternoon and I'm in Wholefoods in Clapham junction with Coach Sabina Skala having lunch. Their selling point is that their lunches are great value and made by "real Chefs". Well either their Chef's need an education or some bright spark in their marketing department does, because this time they've got it so terribly terribly wrong. 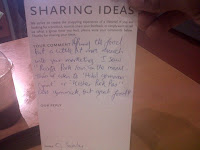 In an attempt to appear culturally diverse (some cynics may even say to cash in on a certain Dragon's Den winners success) Wholefoods have come up with, what can only be described as complete and utter b*ll*cks.

What's wrong with "Rasta Pork Loin" you say? Well, for anyone that knows ANYTHING about Rastafarian's belief systems will know that Rasta's are not too keen on pork. Really, they're not. "Rasta Pork Loin" is akin to "Halal Gammon Joint" or "Kosher Pork Pies". To create a dish as culturally insensitive as this, while claiming to have values of "Education" and "Integrity in All Business dealings", well, just doesn't sit too well.


Filled with anger (hating myself for liking the dish as it was actually quite tasty, and their brazen ignorance)I left a comment on the wholefoods notice board, lets hope they take note and rectify their ways before rightly aggravated crowds congregate outside their shaky walls with chants of "Bu'n down bablyon!"

In the meantime I'll leave you with this Gangsta Wholefoods music video courtesy of Jay from Thames Cross Fit. Thanks Jay - keeping it real!


p.s Thanks to Colin Nwadike for the Halal Gammon Joint inspiration!
Posted by Coach Cj Swaby at 08:50

It's gettin real in the whole foods parking lot!

Apparantly it's a great place to work, but the guy who runs it is a bit loony.

I posted this on your FB page however no harm in repeating for the broader masses and anyone from wholefoods if they read this.

If they wanted to deal with this problem (and we all make mistakes and should be allowed to correct them) and at the same time create some real customer WOW they'd get in touch with you, work with you to create a dish for their menu, name it after you, and then watch some great "word of mouth" marketing in action.

It's also been shown that when a company does something wrong and can turn it around, that the ppl who've criticised them actually go on to be quite ferverant supporters

likely they wont do any of this though as most companies are just too damned afraid to do anything remotely interesting...

I work in Whole Foods Market Stoke Newington. I follow the Rastafari faith and so do many of our cutomers, not only here in London but throughout the USA where WFM is from. I was shocked/saddened/amazed today at the level of unawareness, or to put it bluntly, ignorance that caused this blunder.
I was however pleased that the regional leadership acted swiftly and with common sense when I alerted them to the problem. The dish has now been renamed Jerk Pork!

I hear you Natty, and the ignorance is shocking.They may have changed it at the store where you are, but I was in Wholefoods Clapham Junction this Monday 4th July and believe it or not, it was there on the menu!

Mike, a greed. If policy and menus came from the ground up, there would be a totally different level of integrity in what they do.