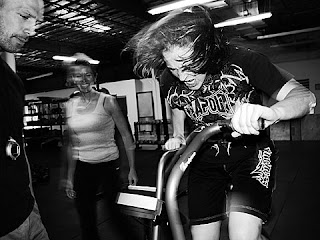 Rob makes sure Jenny Raff hits the target on the airdyne

Every time I visit Salt Lake City and train at Gym Jones I appreciate more and more every second I can spend there... and I know I will be coming back for more.

I was asked a lot of questions about the training there. The common concept is that those Superhumans train there 7 days a week, 100% effort every day, up until they pass out and cannot do anymore. Being honest, this is exactly what I thought when I went there first time in December 2008. I couldnt be more wrong.

The training in Gym Jones is hard but what is more important - it is intelligent and structured. Some of their athletes train there 3x a week, some 2x a week, etc, they do not train 7 days full out. Not every session ends up with people crawling out of the gym, actually they do not do that very often.

I think that the most important lesson I have learned from Rob MacDonald this time, is that intelligent training doesnt mean that your athlete (or yourself) has to get dead tired, it means that they have to get BETTER. Being a chronic overtrainer I struggle to back off training on most of the occasions. With all the injuries I have sustained during the last year, it was obvious that something was wrong with my training and recovery (or lack of it) etc. Rob has pointed out on numerous occassions that I was overtraining. However I refused to acknowledge it and continued training the way I did. I remember he said in April that next time I would come over to Utah, Jenny (one of the girl fighters he trains) would be much stronger than me and I would end up being injured and weaker. And ... unfortunately he was right. Just a week ago - here I was - recovering from back injury not being able to lift moderate weights and losing airdyne race against Jenny. She got much better over the 4 months, me...I just got....more injured. We all make mistakes, the important thing is to learn from them.

After meeting some of you guys coming to the Gym Jones FDI in London, or speaking to you on the phone - I know that you expect some hard core training during the 4 days. I can promise, you will have a chance to taste the intensity of GJ training, but what is equally if not more important - listen to what Mark Twight and Rob MacDonald will have to say. There is a lot to learn from those two.

PS. I actually did a training session that almost made me pass out. If you want to try and have got an access to an airdyne - enjoy!

Probably collapse (however Rob MacDonald would not allow you to lie down, sit down, lean against objects or people - you would have to walk around and try to recover).
Stay strong and smart with your training!
:) Sabina

Instead of calling Jenny a "girl fighter" just refer to her as a "fighter."