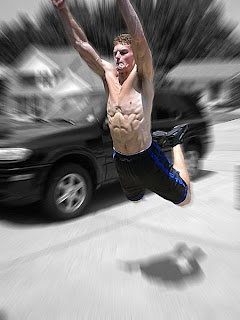 I met Matt Owen during my first ever visit at Gym Jones. Matt was probably the youngest athlete attending the seminar, but hell, he impressed us all!!! We have stayed in touch ever since and I am sure we will hear about Matt very soon - both as a great athlete and S&C coach. I always enjoy talking to Matt and sharing training ideas with him. Last time we spoke, I asked him to answer a few questions for the CJSFitness blog. This is an introduction to Project Deliverance. You will find more training related posts from Project Deliverance here soon.

Sabina: What is Project Deliverance?

Matt: Project Deliverance is a gym located in St. Louis, MO. where we train high school, collegiate, (a few) professional athletes, and anyone who is willing to work exceptionally hard in order to improve themselves. We began in 2007 after my freshman year of college. Myself and a few of my friends, who had just graduated high school, needed a place to train in order to prepare for the next year of competitive sports. We combined our resources, bought some gear, and set up shop in my garage. We discovered Gym Jones a few weeks prior and spent a lot of time observing what they did for the cast of "300" and also the athletes they train. To say the least, it motivated us to be better individuals and athletes. So we began training. It wasn't the smartest system, mind you, but we did see a lot of tremendous gains in terms of power endurance and conditioning. After that first summer back in 2007, I decided that this was what I wanted to do with my life. Since then, I have graduated from college with a degree in Exercise Science, been honored to be the first "real" intern at the Gym Jones facility, and learned all I could from some of the best coaches in the industry. Our training has become smarter, more effective, and has attracted more and more athletes each year. We plan to be in a facility operating full time in about a year and a half. Our future looks extremely bright, and our athletes are very young, ambitious, and motivated. Everyone here is trying to attain a high level of success in their sport 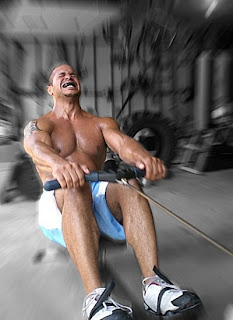 Matt: At the moment, I am just coming off a De-Load period from my time at Gym Jones. Maximus and I trained for about two weeks straight during that time, and I was very tired last week after I returned. My training will be directed at increasing my strength and power production for the Long Jump event in track and field next year. Last year was my senior year on my track and field squad, but I feel that I still have a lot of potential in the field of jumping. I only have three years of Long Jumping under my belt at this point, and I made some great improvements during last indoor and outdoor track seasons. However, I still have some weaknesses that I need to address in order to be a very good jumper in the next two years. The good news is that I have a solid game plan to address the issues that need improving. I need to generate more power off of the board. This will be accomplished by making use of the Clean and its variants, which worked very well for me last season, and also improving my front squat strength. The Soviets successfully used Shock Training (Depth Jumps) to increase the power production of their athletes. This is a technique we use regularly here at Project Deliverance for recruitment and power production. In terms of this current month, I am performing a foundational period with a slight power emphasis (two extra power sessions) to address the demands of the Long Jump. 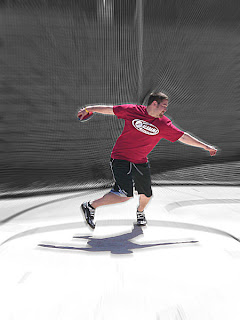 Photo #3: Nick Orf, a collegiate discus thrower and Project Deliverance athlete, warming up at the University of Florida last season.
Sabina: Are we going to see you at the London Olympics?

Matt: Every athlete dreams about going to the Olympics and competing with the best in the world. I am still a relatively young jumper and need to remember my place on the food chain at this point. Most of these athletes that will be at London have been in their sport since they were young children. I have three years under my belt. It is possible that if I have a breakout season this year and next year, I would have a long shot at the 2016 or 2020 games. It's a long shot and is very ambitious, but if we do not set our standards high, then we end up selling ourselves short. I am not going to rule anything out at this point. In terms of my short term athletic goals, I think developing the gym here at Project Deliverance is going to take precedence over my athletic career at this point. I will still train hard, fully commit, and put the required hours in, but competing at that high of a level seems almost unreachable for me. Only the gifted few will ever see the Olympics in their careers. That being said, I love what I do and will be happy just training, competing, and improving every single season. I have a great coach who was an elite triple jumper in Bulgaria. He was a mere 30 centimeters away from qualifying for the Bulgarian Olympic Team. He said it was an insurmountable gap to close. I don't want to end up being that athlete who sold himself short and is left wondering what could have been had I went after my dreams. So in answer to your question: Not the London Olympics. But I am still very young in my sport and we will see just how far I can go... Literally. 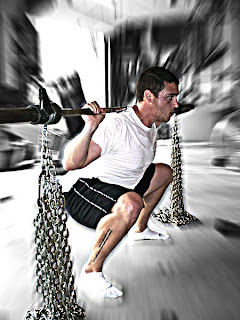 Photo #4: Brad Summers trains at Project Deliverance three days a week and ships out on November 1st for Navy EOD (Explosive Ordinance Disposal) training. He has spent two years training with us and is well equipped for all the challenges he will face during his basic training.
Sabina:Tell us about your last visit to Gym Jones?

Matt: Wow. Where to start? It was an incredible opportunity and I am blessed to have learned from such great teachers, Rob MacDonald and Mark Twight. I remember reading Mark's writing when I was 20 years old. It gave me motivation and direction for my career. It was fitting for me to come full circle and finish at the place that pulled me into the industry to begin with. I assisted Rob "Maximus" MacDonald with a number of clients that passed through the facility. We trained military personnel, athletes, fighters, and performed seminars for a number of attendees. It was a great time of learning for me. In terms of training, I trained with Rob and Mark on a weekly basis. Mark trains a sponsored group of athletes every Tuesday, Thursday, and Friday. I had the pleasure of working in with some of the best athletes in the gym. They always bring a lot of energy to the gym. It was just a lot of fun. I attended the Gym Jones Intermediate Level Programming and Practical Application Seminar as well during my visit. This is the second step after attending the Fundamentals Seminar. This intermediate level seminar provided me with a wealth of knowledge in terms of programming, scheduling, and evaluation for my athletes. We are already reaping the benefits here at Project Deliverance. I would highly recommend this seminar to anyone who is serious about coaching and training. The training protocols that we learned from Gym Jones just make sense and have proven to be effective in each of my athletes. I was also able to meet and reconnect with a lot of fellow coaches, athletes, and trainers. My good friend, John Frieh, who is also a part of Project Deliverance, was able to attend this seminar as well. John lives in Portland, Oregon, is an accomplished climber, and trains athletes in his spare time. My last week at the gym was spent training many of Rob's athletes under his watchful eye. I was evaluated on each session and improved as time progressed. I felt that my ability to train people of different temperaments really improve during my visit. Rob MacDonald really has a talent for adapting his training personality to fit the diverse personalities of his athletes. He is a great teacher, and I look forward to returning for a longer period of time to attend the Advanced Program Design and Theory Seminar and spend more time at the gym itself. I can't convey enough my thanks to Mark, Lisa, and Rob for allowing me to train in their house for those two weeks. It is always a humbling experience to be around the best of the best. 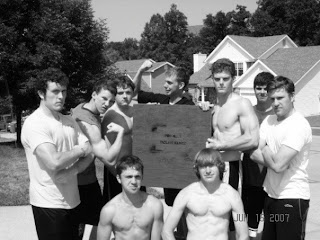