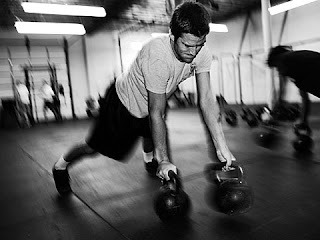 Sabina: You have a huge following in Europe. Your 4 step certification programme gives a chance for opening a satellite unit. As you say, only a few Affiliate candidates will be selected upon completing the Gym Jones educational system. What is a profile of Gym Jones Affiliate? What are you looking at during the selection?

Mark Twight: I am surprised about the European following but I shouldn’t be. Culturally, hard work and discipline seem more at home in Europe, particularly in the north, than in the US. Bradford’s own Justin Sullivan wrote, “with history just as close as a hand on the shoulder,” which suggests a stronger relationship to history and the past than I sense in the US. I believe this connection makes it easier to remember – or perhaps it has helped preserve – a correct definition of “difficult” and “remarkable.” If Gym Jones is poorly understood in the US it may be because the quest here has been for ever-increasing efficiency to the point where actual capacity has been trumped by the cosmetic, and dilettantism has surpassed focused, specialized and persistent effort.

An affiliate would have a deep appreciation for what human beings have accomplished in the past and what they can and may achieve in the future. Fads and shortcuts might be momentarily distracting but not more. The affiliate would be educated but more importantly inquisitive: wondering, asking, testing and striving. We look for someone who understands differences of temperament and how to address them (at Gym Jones a client is matched to a coach who can wring the best effort from him or her based on temperamental similarities or understanding). The affiliate will have “done something” in life or have interests outside the gym that place the gym and training into a contextual hierarchy. The affiliate’s knowledge and experience will have been applied outside of the gym. This is not to say the affiliate must be an accomplished athlete, only that he or she understand the role of artificial training in relation to real life and living it.

We are looking for leaders not joiners, strong, resilient people who are comfortable being “apart” from the norm – and are capable of standing against the crush of the crowd’s momentum. We are looking for someone to light a fire, to tend it, and to teach others to build their own fires. A Gym Jones affiliate must be willing to follow a mentoring model from which the client ultimately graduates: the curriculum and trajectory must make the client independent, able to self-direct training and exploration. If the client chooses to continue study and training with the affiliate it is positive commentary on the coach’s ability but the client should never be dependent or treated as a source of revenue.

We have a good handle of the personal characteristics that define a potential affiliate. We are actively writing the guidelines that define the relationship from a business perspective. However, it’s an open-ended discussion because these are human relationships, which constantly evolve and change so the terms will not be written in stone.
Pic: Gym Jones Disciple Paul Roberts - Wado-Ryu Black belt
Posted by Sabina Skala at 00:48