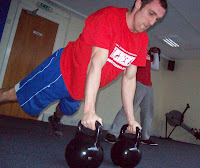 This weeks session was led by Cj, and the emphasis was on developing power and strength endurance. Inspired by the Gironda method, which is similar to Charles Parliquin's German volume training. Vince Gironda system was designed to create Mr Olympia's and Mr Universe's (he coached many during his reign as a coach from the 1970's until his death). Parliquin's adoption of German volume training and his success in creating top Olympic athletes, shows the potential sporting application of this method. To find out more about the legendary Vince Gironda check out this article on T-nation.

So here's what we got up to in the session.

This took about 30 exhausting minutes. Sabina opted to finish us off (literally) with a modified Tabatta protocol.

After a prolonged recovery consisting of lying flat on our backs and gasping for breath, we dusted ourselves off and staggered into the rest of the weekend.
Posted by Coach Cj Swaby at 14:57