A few weeks ago my nephew Jak Ryan-Hall broke his wrist in a Basket ball match. At seventeen years of age and a towering six foot four, Jak’s position on the team is as a ‘Small Forward’. A week later he was asked to adopt a different role, that of Team Coach for Worthing College, when the School’s teacher was unable to attend the Championships.


As team Coach, Jak headed up a bus load of seventeen to nineteen year old young men, with nothing to guide him but his own experience, a game plan, and a belief in the ability of the team around him. As a Coach I was impressed with the way Jak utilised his knowledge and experience to modify his game strategy to maximum effect, as an Uncle I am proud at the impeccable way Jak Ryan-Hall lead his team, and stepped up to face a potentially daunting challenge. Here is Coach Jak Ryan-Halls account of the U19 South East National Basketball Tournament 2010.

5:30 Am. That’s the time I woke up to Coach a Basketball tournament for the first time in my life and I was nervous. I had only ever been a player before, but never a Coach. I was still excited because I still wanted to lead the team to victory. We were competing in the Under 19 South East National Tournament. As we arrived we heard that one of the favourites of the tournament, Kingston College, had pulled out. As we observed the other Basketball teams in action I thought we had a good chance at winning.

Game One: Bringing The Heat


So our first Game was upon us VS Chichester College. The game plan was to ‘Run and Gun’ because their team lacked in athleticism and we had plenty. On defence we played pressure defence on their Point Guard and normal man-to-man defence on the other players. Immediately we were causing havoc on defence. The Point Guard turned over the ball and we had our first Points. We then got a steal and had a ‘two- on- one’ situation which we finished comfortably. Our defence was strong and they barely scored in the opening minutes. However, frustratingly we didn’t either. We had good ball movement, open 3 pointers and penetration to the paint. But we couldn’t finish. Slowly the opposing team started to fight back and we were only up two points with 3 minutes left on the Clock.


I called a Time-out to stop the bleeding. I switched the offence to an isolation ‘pick and roll’ on the wing with our Point Guard and Shooter. It was extremely effective. We were left with open shots, drive to the baskets and we began to pull ahead. They couldn’t handle a ‘pick and roll’ between two players who could drive, shoot and were quick. And when they tried to bring help from the weak side it left a shooter in the corner. We pulled away with the victory!


Our Second game saw us playing a Strong Richmond team. In the game before they tore apart their opposition with offensive boards and steals. So I opened with Two Point Guards, Two Power Forwards and one Centre so we wouldn’t be beaten on the boards and with the two Point Guards, we wouldn’t get the ball turned over. It worked a treat as we scored 9 points without reply. We dominated the boards and their Centre didn’t have a glance at the Ring. Their Small Forward kept driving and was drawing fouls and knocking down his Free throws. This got our Players into ‘Foul’ Trouble so I had to make some forced substitutions. With two of our big men on the bench we were forced into a smaller line up which worked in Richmond’s favour. 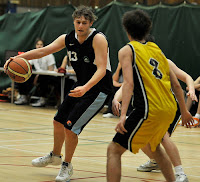 With two minutes left on the clock and our starters back on the floor in foul trouble we were in for a tight finish. They moved the ball well on offence and had an open 3 point shot. They knocked it down. We were down by one. With 30 seconds left we got the ball in play quick and pushed it down the floor. Our Point guard took an ill-advised deep jump shot with 20 seconds on the clock and 14 seconds still on the shot clock. Fortunately he knocked it down. We were up one. Their Coach took a time out. I put the team in a man to man defence and told them to put themselves in a help side position if their man didn’t have the ball. I emphasised the importance of ‘boxing out’ and how we want to force them into a jump shot. We came out of the time out and there was 20 seconds on the shot clock. They kept on trying to penetrate but couldn’t find a gap. They tried posting up but with 3 big men on the floor it wasn’t working. With ten seconds left I felt their panic from the sidelines.


With four seconds left they found a shooter just inside the 3 Point line with less than a meter of space. He raised up and pulled the trigger. The ball seemed to fall for an eternity. The whole building took a breath. But the ball bounced on the ring and off again. Our whole bench were on the verge of celebrating when their Centre rose up above all of our players and got a tip in just before the buzzer. I was in disbelief. I was also mad because I emphasised rebounding. However, I hid my frustration and gave encouraging words to the team. We now needed a victory in the next game to go through to the Quarter Finals.


The Semi Finals: Out of Hell’s Kitchen


Our deciding game would be VS Queen Marys. I’d seen that they had a good shooter from their previous game so I set up a 4 man ‘box defence’ with the remaining player man marking the Shooter. This worked well as we held them to only a few points and their Shooter barely touched the ball. We were also shooting well and getting offensive rebounds. Their Coach took a time out and I was happy with my team so I kept it the same. Queen Mary’s came out with their Shooter playing the Point Guard position. He was a very Good ball handler and created his own shot. He brought his team level in points by himself. We couldn’t handle him defensively but we were knocking shots down on the offensive end. Our Shooting began to find his stroke. It became a two man game. Their player would go to one end and make a very tough shot but then Our Shooting Guard would respond immediately. The game was tied so we went to over time. With 18 seconds left the game was tied. I set up a play for our Shooter. He got open with 7 seconds but got double teamed so gave it up but got it back immediately. With 5 seconds left he was working immensely hard to get open but couldn’t. With 2 seconds left he was forced into a fade away, turnaround 3 Pointer with a hand in his face. But amazingly he made it. Our team sprinted towards him to celebrate. I was relieved. We were through to the Quarter Finals.


The Quarter Finals: The Inferno

Walking around the building I was receiving recognition for my Coaching skills and the Teams Success. We were all feeling good about ourselves and started to get confident that we could win this competition. Our shooter, Louis Harris, was receiving lots of recognition for his game winner and his play throughout the Tournament. Going into our Quarter Finals I felt confident, the team felt confident and we had a swagger about us. We knew little about our opponents Thornton. From the tip we were on the back foot. Our man to man defence wasn’t working because they were too quick for us. They were brushing our players of and also getting easy points in transition. I called an early timeout and told the team to play with more passion. We were playing as less of a team and with no energy. I also switched our defence into a ‘2-3 Zone’.

Coming out of the time out we showed little signs of improvement. Our team was paying selfishly and not utilising the shot clock but throwing up tough, early shots. The crowd was bigger in this game and the players all wanted to be the best player. I feel they were jealous of the compliments our shooter was getting. I had to make substitutions. I brought in a shooting guard and a Centre. I hoped they would bring energy and the rest of the team would feed of it. It worked a charm. They started driving and not settling for the outside jumper and the others followed suit. They stopped the transition points and we began to dig in to the lead. With 4 minutes left we trailed by nine.

A quick three points and some good defence gave use the ball and only down by six points. Our Small Forward drove and drew a foul. He knocked one of two free throws and the lead was only five points. They moved the ball well but our defence was up to the challenge. We forced them to use their whole shot clock and shoot a bad shot. We then put the ball into our Power Forward who done a great spin move to put us within 3. However, Thornton pushed the ball and found an open shooter in the corner who nailed the shot and got the foul call. With a minute on the clock and down by six I called a time-out. I set a play for two picks at the top of the key with both screens rolling to the basket.


I told the team to try and get a quick to and they play full court man to man. They executed the play in a short time. This gave us plenty of time to pull pack the lead. We then played tight defence. Thornton were trying to run the clock down. 15 seconds into the shot clock we got a steal and a layup. We were down two with 35 seconds left. All we needed was to play good defence and force a poor shot then we would have the ball with ten seconds. They ran the clock down right to the last second and pull a wild 3 pointer. They made the shot. That crushed our dreams of a comeback. We got the ball and pulled a quick shot before the buzzer sounded. 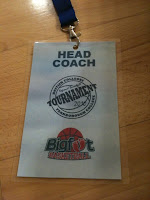 Although we didn’t win the tournament I feel it was a fantastic experience. Coaching ten 17-19 year old boys wasn’t easy, but once they understand you know what you’re talking about they respect you. I feel that any player wanting to improve their game should try and get some coaching experience because you learn certain aspects of the game you may not appreciate as a player. It also helps you leadership skills. I believe that this experience has helped me become a better player and am glad that I have done it. As a result of my performance Coaching the U19 boys team, I have been asked to coach the U19 Girls team in the South East National Basketball Tournament on December 9th 2010.
Posted by Coach Cj Swaby at 03:01