I first met Jane Maddern at Body Power 2010. I was heading up part of the Team that represented The International Kettlebell And Fitness Federation, along side Rannoch
Donald, Jonathan Lewis and of course, Steve Cotter.

What struck me about Jane was that she was one of the few in the crowd of muscle men and body beautiful women that stepped up and took on the Kettlebell Competition that the IKFF and put down.

Not only did she take it on, Jane won the challenge. What was remarkable was that she was new to Kettlebells and had limited experience. What was even more remarkable was her personal journey that I got to know as I coached Jane for the IKFF Certified Kettlebell Trainer Level 1 course.

Read on and be amazed, Jane is an inspiring and phenomenal young lady and a testament to the human spirit, she is only now just realising the amazing amount of strength an potential that she posseses. In short, SHE ROCKS!

What is Crohns Disease?

In simple terms Crohn’s disease is predominantly an inflammatory bowel disease. It ulcerates the colon or the intestines, possibly both. It becomes very difficult to live a ‘normal’ life, mostly due to the severe abdominal cramping , bleeding and diarrhoea.
Crohn’s can also attack your body’s systems in different ways. It can inflame other parts of your body including your eyes and joints, plus it has many, many side effects as you don’t absorb all you should from your food intake as it is rapidly passing through your system.

This my experience. I admit , I had the typical lifestyle of getting up, no breakfast, going to work, sitting at a desk all day, coming home, watching TV and eating rubbish meals in the evening. It was shortly before my 25th birthday that I started to suffer from cramping in my abdomen. Shortly after that the diarrhoea started and it felt like for over a year it never stopped. Test would prove conclusively that I had Crohn’s disease.


This was the pattern that shaped my life for the next five years. I would take Pentasa (an anti-inflammatory drug for Crohn’s) but every so often suffer bouts of diarrhoea and cramping regardless. Often I would be in so much pain I couldn’t even stand. I would attend hospital appointments regularly to have my inflammation levels checked, which we always high. I tried to live a normal lifestyle, although there were foods I had to avoid. I cycled regularly, but my energy levels were low and I always felt drained.

I was in my 30th year when I got really sick. It didn’t start like my other bouts; I had diarrhoea but no cramps to start with. Then came the ulcers. Firstly in my mouth, just one or two, then my whole mouth; from my tongue, throat, into my stomach, colon, intestine and all the way through my entire system. I couldn’t eat solid foods at all. It became impossible for it to pass through my body. Things got really bad. I expected my legs to become weak due to the lack of nutrition but it even became too painful to walk. In a matter of weeks I couldn’t feel my legs at all. Neither one of them. This made simple things like getting in and out of the bath interesting! My legs were black and blue, my feet and joints swollen so badly that I actually could only feel horrific pain in them but no real ‘feeling’ apart from that.


The inflammation then attacked my spine shortly after. I could not lie down in bed at all and had to be propped up by pillows. I can’t even now describe the agony I was in. My spine is now off to one side at the top and twisted near the bottom. As if all the joint inflammation wasn’t enough to cope with, my internal organs were a disaster area. I had lost three stone in weight, my hair was falling out and my finger nails fell off. I soon began to pass blood, at first just a little bit, but it soon became a scary amount. I vaguely recall an ambulance arriving to take me away, I was given blood, morphine and made ‘comfortable’.


I weighed about five and a half stone I don’t think I ate solid food for over three months. I just drank these foul tasting supplement drinks which were full of nutrients. I began to be able to eat again, only rice and eggs at first. Just tiny amounts. Bland foods, but WOW! To me it all tasted amazing. I chewed my food for possibly the first time in my life instead of just gobbling it down in front of the TV or running out of the house. I chewed it. I tasted it. I took my medication.
I spent three months in a wheelchair then a walking frame. Finally I progressed to cruthes, which felt like freedom! It took me pretty much the whole year to walk again, a bit longer to get the strength in my legs. I couldn’t lay flat in bed for over two years. It was impossible for me to sit up in bed in the mornings, I used to get to the side an roll out! As for my spine, well that remained painful and uncomfortable for the next six years.


I took my medication for a few years after this scare. But I hated the thought of being on it forever. The steroid I sometimes took made me feel disorientated. I also felt zapped of energy most of the time. It took all my effort just to spend the day at work and often I would come home and fall asleep. The anti-inflammatory drugs , I stopped taking about two years ago, much to the annoyance of my consultant. I found I could cope without them, still suffering from cramps, occasional bouts of diarrhoea. I would go to hospital check ups every three months, with regular blood tests that always still showed a high level of inflammation in my system. I could never take anything for the pains in my joints, as all the arthritis medication would have affected my Crohns! Further tests would show it was my entire colon that was ulcerated and nothing could be done about it.

In the summer of 2009 I had a bone density scan. The bent form of my spine (as you may have guessed) was officially given the name of Spondylosis, I also had the onset of Osteoporosis, my spine was beginning to slowly degenerate. Now wonder I was still in pain! I decided I needed to help myself.

I talked my best Friends into starting Kettlebell training programme with me. We started once a week, go through all the basic moves, swings, cleans, presses and some bodyweight movements. It was challenging. I’d not really done any exercise for quite some time. But, I found I really enjoyed it. It was fun and I felt like I was achieving something. Oddly I felt more energised! I bought some kettlebells from Wolversons Fitness to keep at home and started using them once a week as well as doing our Thursday sessions, which were progressing with Kettlebell Windmills, Squats and other Kettlebell exercises.


The difference was gradual, in fact it took a food few months of hard work, but, one day it occurred to me something was different, I WASN’T IN PAIN anymore in s my spine! My exercises were helping strengthen my muscles and support my joints. I was astonished, blown away that this metal ball with a handle could do so much for me. I felt stronger everywhere. My stomach was also feeling the benefit of these movements from picking up shopping and moving boxes at work. Sitting up in bed is a doddle these days, but I don’t take it for granted.


In May 2010, I was due another hospital appointment and for the first time in a long, long time i felt fit and well. My Doctor opened my folder to look at my blood results. “You have no inflammation showing in your blood?!” He asked how much medication I was taking and I replied “None!” Of course he tried to tell me I should be on the medication, but it was pretty hard to argue with the facts. The facts were plain as day. For the first time in twelve long years I had NO inflammation markers. I was singed off for a whole year.


A Miracle At Work? No. Not Really

I changed my lifestyle. I exercise regularly, at least five times a week. I eat well. Lots of fresh vegetables and fruit, and I’m not on ANY medication despite my condition. I just tried and tested things and found what worked for me. Obviously when I first tried stuff out it was just little portions. Sometimes well cooked through. Now I know I'm not as damaged inside (hopefully everything is healing, well it must because I'm not bleeding or doubled over in pain) I eat raw spinach, carrots and other raw stuff I couldn't manage to tolerate at first. This could be temporary, but only time will tell. But I can say with certainty, this is working for me. I didn't ever like what I was told at the hospital... They'd have me believe I'd not walk properly again, I'll end up with a colostomy bag!

At Body Power 2010, I met the IKFF team, and Coach Cj Swaby from CJS Fitness. Cj Swaby coached me on Kettlebell training and encouraged me throughout the summer, and in October 2010 I passed the IKFF Certified Kettlebell Trainer Level 1. A great personal Victory for me. I could rant on forever about how to some people this all seems just a little like too much hard work and chomping down on steroids, sitting in front of the TV with a takeaway, ready meal, or a pint of larger would be a whole lot easier! But, my experience of life tells me nothing worthwhile is easy. Challenge everything! 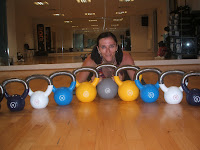 Your a true inspiration, thank you for sharing your story with us. It just goes to show what pure determination not to give up can achieve, you put the rest of us to shame. If this is what lifting kettle bells can result in lets all get lifting!!

Very inspirational story Jane.
As you know, I was at the IKFF CKT with you and I can therefore vouch for how tough it is! I knew you had some issues from talking to you, but didn't quite realise you had overcome such adversity!
You're an inspiration!

Thats truly inspirational and brought a tear to my eye! I suffer from Crohns and my story so far sounds similar to yours although i havent gone through the bad bout (yet!), I have recently changed my diet and am running the London Marathon for Crohns disease in April, thanks to you I am also doing my first kettle bells session next week too!! Keep up the good work..
If you or any of your friends wish to donate to crohns and my challenge please visit http://www.justgiving.com/Claire-Maz9121