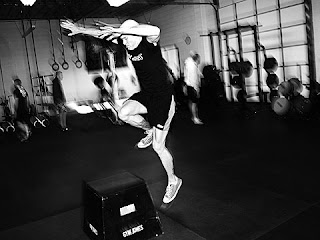 Sabina: How has the gym evolved since you have opened?

Mark Twight: The beginning was humble, if a few egomaniac climbers getting together could be described as such. We borrowed space, borrowed, built or bought the gear second-hand, and pooled the collective training knowledge we earned over decades of climbing at a very high level. We added some different ideas (I refuse to call them new) and let the whole thesis marinate, recording what happened along the way. Later we dropped the climbing emphasis because it was too limited: climbers are notoriously narrow-minded and think themselves special, though physically the sport is no different than many others. We began working with MMA and jiu-jitsu fighters and a whole world opened up. The good ones rose to the surface and, in a push-me pull-you relationship they became the subjects of my experiments for the next couple of years but also my teachers. Not in the sense that I do jiu-jitsu but by providing intelligent, organic feedback and explaining the demands of training and competing I learned how to best prepare them for the sports.

The pressure-cooker nature of an invitation-only gym combined with the work ethic and expectations of its leaders allowed only the most resilient to survive and thrive, which produced obvious results. Some old friends recognized that what was happening to our trainees in both the physical and psychological sense tied in nicely to their own project, which was the movie “300”. When the stunt coordinator and director invited me to prepare the cast and crew for the film I declined. When Lisa threatened to divorce me if I didn’t do the job I reconsidered. I also realized that – whatever I believed about the movie business and its values – the project was no different than preparing an athlete: there is a starting point and an objective, the trainer or coach must define the path and guide the individual along it, pushing, cajoling, coaxing, tricking and modifying the path as needed, all the while respecting the strict working conditions and the deadline.

Many state that we used this means or that method to achieve the objective, and then claim to use the same means. Then comes the pitch, “if you want to unleash your inner-Spartan pay me and I’ll train you to get that same look …” The fact that a couple of hundred thousand clients using the same means are still overweight and out of shape proves these copycat trainers have missed the point. Or those means are either irrelevant or misused.

That project taught us that training means and loads must be applied to individuals. One size does not fit all. We learned that progress depends on leadership – and you better lead from the front. We practiced and proved that hard work and discipline produce results beyond the physical, that confidence derives from overcoming difficulty, from controlling one’s behaviour, from The Struggle.

Every result comes at a price: if you just go through the motions you are rewarded with a shallow or empty prize, if you do mindful, hard work the result will be genuine, and satisfying. Pay the entry fee. Take the ride. If you train 1000 hours per year you might have a shot at the world champion. If you give training 200 hours of casual attendance you can’t expect the same. In 2004 we hoped the shortcuts being marketed by a particular fitness company would produce the meaningful results they claimed. Our own testing and experiments proved those shortcuts didn’t lead where we wanted to go and it changed the nature of our project forever.

By a circular route we came back to what worked when I began training for climbing: simple and attentive and aware, hard and smart effort, and personal honesty regarding it. If the client claims he or she is doing the work but results don’t manifest we know the client is lying. That hasn’t changed either.
Posted by Sabina Skala at 00:27