Everyone that trains seriously, competitively or otherwise at some point will realize they’re not indestructible machines and from time to time suffer injuries.
It happens to the best of us and I’m no different having had a plethora of different injuries over the years.
I could blame them on a number of things, bad form, hard sparring, wear and tear etc etc, but in the tradition of competitive pride that annoying niggle is ignored, “worked through” and inevitably becomes a fully blown “I’m going to have to take a month off” setback.
With that in mind I thought I’d tell you about my most recent endeavor in to the world setbacks.
So yes, the niggle was ignored and I quickly became aware that something was drastically wrong when I had to keep changing my training regime to fit around the increasing pain I felt in my shoulder. To the point, all pressing movements were out, any kind of pull ups were out, any bicep isolation exercises were out and I had virtually no external rotation.
I always find seeking help with these kinds of issues a bit hit and miss. Below par therapists usually far outweigh the good and knowledgeable ones, luckily however, I had been introduced to Micheal Bordignon of Northern myotherapy previously and was very pleased when, after describing the symptoms and the inevitable “worst case scenario” talk which involved musings of a labral tear, he actually identified the problem to be bursitis.
Shoulder bursitis is inflammation of the bursa sac, a small cushion of fluid between the acromion and a number of tendons including subscapularis, supraspinatus, and bicep. It helps reduce friction as the tendons 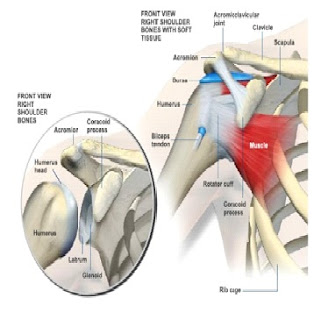 move back and forth.
With bursitis there is almost certainly going to be tendonitis . For me, this was definitely the case. I had increasingly aggravated the bicep and subscapularis tendons to a point they were so swollen they had started to push on the bursa which then caused it to become irritated.
The pain is quite acute especially at the front of the shoulder and is easily pinpointed which is good in terms of diagnosis. The pain, although sharp and annoying is bearable, and I found in the early stages of the injury that, although painful initially it subsided during training as I began to warm up. Obviously, at this point I should have been listening to my body as it began to get worse and restrictions in my range of motion were becoming more apparent especially regarding external rotation, which at its worst was less than half of what it should be and very painful under load.
Contributing factors
After diagnosing the bursitis and tendonitis we found with a little more investigating that the fundamental reason for the occurrence was an unstable shoulder. Due to lack of development, the shoulder had dropped down and forward effectively decreasing the gap between the acromion and top of the humerus, especially when raising the arm laterally and anteriorly. It’s fair to say i had been aware of this to some degree for some time prior to the injury, however, despite my best efforts to employ good form and muscle recruitment it was a case of too little too late and I believe without the right corrective procedures it was a lost cause. 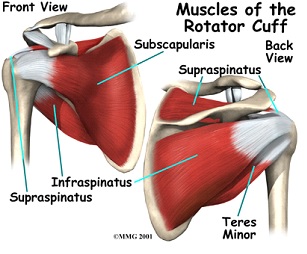 Specifically, the muscles around my scapular, mainly subscapularis and infraspinatus were the culprits, to a lesser extent teres minor, supraspinatus and the superior portion of my trapezius were involved also. Underdevelopment due to wrong muscle recruitment in this instance can really highlight how important initial programming is. We know it only takes a few repetitions to properly program a correct procedure but can take hundreds to re-program a bad one which, essentially, I’m having to do now. ‘Start as you mean to go on’, I believe the saying goes.
Proprioception
Proprioception - the ability to sense the position and location and orientation and movement of the body and its parts.
For rehabilitation to be successful I had to employ the use of a series of proprioceptive exercises. Contrary to what seems like popular belief amongst some therapists (I say this from experience), rotator cuff exercises involving internal/external rotation on several different planes was not an option .Because of the position of my shoulder the very movements involved in said exercises would have only served to aggravate the tendons further.
I see proprioceptive exercises as a way of isolating the specific muscles or groups of muscles affected, obviously to increase strength in the area but also to get good mental connection and therefore efficient motor unit recruitment, so when you’ve reprogrammed how a certain muscle should contract through a certain range, recruiting those muscles through more advanced movements becomes second nature.
The exercises prescribed for rehabilitation, a combination of isometric contractions and movements under contraction, target the muscles of the shoulder girdle to strengthen and reposition it in such a way that it effectively increases the gap between the acromion and humerus relieving pressure on the bursa and tendons and allowing the inflammation to settle.
So, a few things to highlight, obviously being aware of imbalances in muscular recruitment and development, and any other issues with anatomical positioning could help in self assessing potential problems. Admittedly, this injury probably could have been avoided altogether and as it is I’m now in my fifth month of dealing with it.  Also, I feel I should mention again the importance of seeking a good therapist to work with, a lot of the time I have spent dealing with this issue was because of bad advice that was detrimental to the healing process and its fair to say that since working with Michael I have made more progress in the last month than at any other time.

Good post , Injuries are terrible to cope with when all you want to do is train haha.