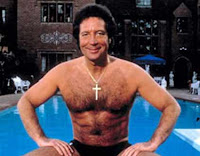 Tom Jones is a welsh singer who has been belting out the tunes since the 1960's. To this day he is still considered by some a sex symbol, its common to see adoring female fans screaming at his concerts.

While Mr Jones obviously had his fair share of Testosterone circulating through his blood stream, I wonder what would have happened if you threw in a hormone optimisation protocol and some serious resistance training? Perhaps even the occasional Odd Lift?

But What Are Odd Lifts?

Odd Lifts are basically uncoventional lifts you are unlikely to see at your local Fitness First, LA Fitness or Virgin Active or other such chain of commercial health club.

Because of the rich sensory control required to execute these lifts, and the weird and unusual joint angles your body can be taken through, Odd lifts are considered advanced level of training. Embedded in the notion of "advanced" training is the label of "dangerous" and by default "Really, its not for you" hence you will not see the exceptional menu of Odd Lifts that are available, practiced at your local gym.

The possibilities are vast,from Sott Press, to Two Hands Any How, to one arm snatches. Most were practised by strongmen and strongwomen of old, to the present day. There is even an Odd Lifts Strength Association with regular competitions (don't believe me? check it out. Then come right back)


Do you have to do Odd Lifts in your training? No you don't. Conventional Lifts work fine. What I would say is this, If you do what the average person does, you will get average results. That's fine, but I believe in the exceptional. Odd Lifts can develop freakish strength specific to the lift, plus when effectively integrated into your training, they can have great carry over to conventional lifts, or your chosen sport.

In the coming weeks we will be covering some of the more popular, and lesser known Odd Lifts in detail (and a few legendary figures in the iron game). If you want to learn how to execute the Odd Lifts first hand, or want to learn how to become hormonally optimised with expert Mike Mahler, then you will definitely want to check out the Dinosaur Training and Beyond Workshop in June 2012 in London, UK.

In the meantime enjoy the two video clips below. One is an expert in their field, unique and a little bit unusual, the other one not so (I'll let you decide which one is which!)

Good blog about health and fitness , I am very interested to collect precise written material on health and fitness guide , that’s why I come on your blog. I like all fitness articles but my favorite article is "Its Not Unusual ". Your article is superb, so I want to save this on my online library.