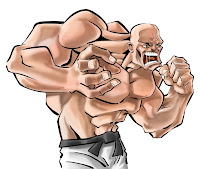 The fighter approached me. With less than 6 weeks to go before the championships, their injury showed no sign of letting up. It looked like their dream was slipping away from their grasp. Everything they had hoped for, everything they had sweated and sacrificed for, would be for nothing.

They knew they should think positively, they understood that. But that's not how they felt about the situation. Frustrated, angry, and crippled with the realisation that they may not be ready in time. No matter how much they tried to see the silver lining, the future looked black.

Training was being affected. It showed in the session. Their numbers were clearly off . Their times were lagging. They found it hard to focus on the task at hand, and would often be non responsive to spoken instructions. It was clear we were going nowhere. I pulled the training session to a grinding halt. "I think we should have a chat." The fighter nodded at me knowingly, as we stepped into the dimly lit office.


What they BELIEVED (They should be feeling and saying positive things) was not in alignment with how they FELT(angry, frustrated, upset, fearful). This misalignment, compounded with the existing situation of the injury, and the potential of the desired goal not being achieved, appeared to the fighter as one big insurmountable mess. It was time to chip away at the crippling situation.

I started with the premise that emotions are useful tools. The cool thing about tools are that they are pretty effective in getting the job done. As long as you select the right tool, or know how to adapt the tool to get the job done.


The fighter recalled a time when they had set themselves a goal and had achieved it. Their face lit up like bonfire night. Over come with the emotion of joy and satisfaction at achieving success, they told me they felt "Awesome. On top of the world."

I pressed to see if there was a time when it appeared as if they weren't going to achieve it. "Of course." They responded. "How did that feel?" Caught off guard the fighter paused for a moment. "I was positive about achieving the goal." Curious I asked "Really? So just to clarify, in the moment you realised you weren't about to achieve your dream, you were positive?"

The fighter reflected, as they did so their fire began to go out. "Well, actually no. I felt negative, frustrated." "Is it similar to how you feel now?" "Yes."

Realising I had tapped into something I asked, "So what did you do?" The fighter wasted no time in responding, "I was persistent. Focused. Took action until I achieved what I wanted."

"How did that feel once you achieved success?" "Aah, it felt amazing. I felt unstoppable, as if I could achieve anything."

"But at the time of pursuing your goal you felt negative?" "That's right." "Then you got persistent and focused, and that helped you to be successful in achieving your goal. Is that correct?" "Yes."

"So can you see how being negative was useful, and it gave you focus and persistence so that you were successful?" The fighters expression quickly changed from confused to amusement. "Yes I can see that." Still curious I asked, "Were there any other times this happened? where being persistent and focused made you successful?"

"Quite a few actually." The fighter went on to recall several times when they had been faced with challenges, and felt negatively about the situation, and then became focused and persistent until they got what they wanted. We spent a few more moments anchoring their new found resiliance, so that they could recall it when they wished, plus erasing their inner conflict. In this case, negative thinking worked.

The take home message? All emotional states are valid and can serve you - if you are willing to hear the message. Its easy to get sucked into the positive thinking trap, but know that negative and critical thinking can be of service to you. In his book, What Self Help Guru's Should Be Telling You, Mike Mahler explores just how positive thinking can derail you, and the power of negative thinking.

Self deception can creep up on the best of us, so stand guard. Be brutally honest with yourself, it might just lead you to success.
Posted by Coach Cj Swaby at 06:36