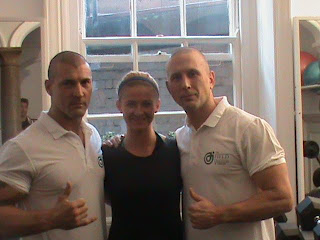 There seem to be a trend, developed over the last years - a trend of guruship/expertship or role models. This is especially noticeable in the fitness/wellness industry. No, not only as some may believe in the circles of spiritual yoga (btw - I have nothing against yoga, quite opposite), but the trend is also and probably even more noticeable in hard core, intense training communities. Groups gathered around some X training system will defend it like brave soldiers and claim that their system is better than Y or Z, etc. Some will only go to the seminars ran by their gurus and then shout out that Guru X is the only true S&C Coach that knows THE SOLUTION and anyone else is a charlatan etc. The true is that guru X or guru Z or training system XYZ - all of them are good, providing they produce desired results. Who knows ...maybe if guru X met up with gurus Y & Z and have a debate, compare their work - the outcome may actually be revolutionary. The problem is that most of the gurus are so occupied with their own greatness, that they are not willing to share it with others who could have different views on certain topics. They chose to surround themselves with people who praise them and wont dare to differ. There is an anecdote circling around about a well known s&c coach, who at a seminar refused to answer a question regarding a topic he was talking about, he just didnt appreciate anything he said being questioned. I like asking questions, I dont really believe in training systems and I like learning from the best in the industry, who actually practice what they preach (you would be surprised how many gurus do not follow their own recommendations).

There are a few great coaches whose work I follow. Limiting your education to one individual's methods restricts your growth as a person and as a professional. One of the trainers I have followed for some time is Scott Sonnon. 10 days ago, I had a great pleasure to attend a Master Class ran by the man himself joined by Alberto Gallazzi. Most of us recognise Scott Sonnon as a great martial artist, strength and conditioning coach with a truly inspiring life story. Scott Sonnon is the man behind the TACFIT training, he has been voted (in 2010) "one of the 6 most influential Martial Artists of the 21st Century" by Black Belt Magazine and is a key note speaker for Mensa International. This is pretty impressive for a man who was dyslexic, nearly got blind in his youth due to myopia and Thygeson's disease. He also suffered from Osteochondrosis, an illness that shreds the connective tissue throughout the joints and weakens the development of growth plates. Looking at Scott Sonnon now, you would hardly believe that he ever had any health problems. And yet, his journey and the story of triumph despite all odds inspires people in the fitness and wellness world.

I was looking forward to meeting this remarkable man and I certainly wasn't disappointed.

The masterclass consisted of 3 sections. In the first part, Scott Sonnon presented sample neck, shoulder, back and hip mobility drills. We got through the movement progressions and also regressions. Later Alberto Gallazzi - CST Head Coach and RMAX European Director took us through an introduction to clubbell training, which included swing, pendulum, arm cast and a sample workout. We finished the day with some prasara yoga elements taught again by Mr Sonnon.
4 hours was not enough to even scratch the surface of Scott Sonnons knowledge, he is an encyclopedia of human movement and beyond. If you have a chance to attend any of his workshops/seminars I thoroughly recommend you do it.

PS. Diego Core, who organised the masterclass is the London based TacFit trainer. If you are based in Central London - check out his great facility in Marylebone and TacFit classes. More details here http://diegocore.com/.

How was I unaware of this?!

How was I not aware of this?!

Kathleen what precise information are you after? If you could specify a bit more, I am happy to assist, sabina