Last year I came across a book - "Ultimate MMA Conditioning" by Joel Jamieson. I read it several times and I still keep coming back to it every week. It does sound like a serious book crush, but I consider "Ultimate MMA Conditioning" to be one of the best books on the subject of conditioning for combat sports that is available on the market at the moment. I also spoke to Joel several times and he is definitely a coach I would seek information/ advice from on the subject of conditioning for combat athletes. 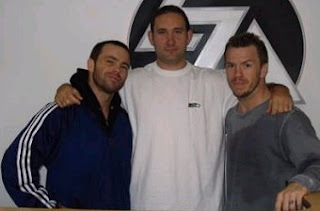 For those who are not familiar with Joel's work here is a short info:


He formerly served as the Director of Strength & Conditioning for Pride FC and currently works in a similar capacity for Dream. Prior to his work in MMA and combat sports, he spent time training D-1 football players and worked in the NFL with the Seattle Seahawks. He has trained countless teams and athletes from the NFL, MLS, NHL and NBA and Olympic competitors from 5 different sports.

His articles have been published in a variety of online and print magazines (also in UK versions - check out recent issues of Fighting Fit magazine) and journals. Joel is a frequent presenter at local and national training conferences.

Since I have started working with fighters I have been asked numerous questions (by trainers and fighters themselves) about strength training for combat. Everyone who works with me knows my view on the subject. I asked Joel to look at a few questions I came across, so here you can get the answers from one of the best coaches in the industry.

Sabina: There is no doubt that strength training is highly beneficial for combat athletes. The question is - how strong is strong enough? Some trainiers believe that once certain strength standards have been achieved, fighters should only maintain them and spend more time focusing on technique and/or game plan. Others believe that an athlete can never be strong enough. What is your view on it?

Joel: At the highest levels, there is always an inherent tradeoff between strength and power and the ability to maintain it. This is why you’ll never see a world class sprinter capable of running a marathon and vice versa. In combat sports, we’ve all seen examples of this as the strongest, most powerful fighters have often also been the ones with the worst conditioning.

The more muscle tissue an athlete has and the more force they are producing, the more energy is required to sustain it and this means that in combat sports, there definitely needs to be the right balance between strength, power, and endurance. At the end of the day, strength is only as good as a fighter’s ability to use it effectively throughout a fight, so the tradeoff between force production and endurance should always be kept in mind when it comes to training combat sport athletes.

As far as how much strength is enough versus how much is too much, it’s a very individual thing and it really comes down to the physiological capabilities of the athlete. Genetics probably play the biggest role in this regard. Everyone is different and must find the right balance of strength, power, and endurance based on their own limits of performance.


Sabina:Training camps are very popular with fighters. If you only have a chance to spend a few weeks (3-4) training a fighter before the competition, would you spend any time on strength development?

Joel: With only 3-4 weeks before a fight, strength work will be done only a maintenance level. You’re not going to be able to build a significant amount of strength in such a short period of time and the athlete needs to be spending the majority of their time training specifically for the fight. I’ll usually have guys do one strength session per week for 45-60 minutes or so when we’re 3-4 weeks out from a fight. More is not necessary and will likely take away from their more specific training.

Sabina: How many compound lifts would you use in a single strength session, and why?

Joel: It depends on the session, but anywhere from 2-4 compound lifts can be used in a single strength session. I tend to keep things simple from an exercise standpoint as far as general strength is concerned and there are only so many good general compound movements that effectively develop the CNS.

Sabina: Do you tend to work with 1RM or 5RM when training your combat athletes?

Joel: I work with a range of volumes and intensities so I don’t know that I have a tendency towards either one. I use anywhere from 1RM – 6RM for strength/explosive work depending on the situation and the athlete, both ends of the range have their place in the development of strength and power.

Sabina: What is your view on olympic lifts and their derivatives. Do you use them when training fighters?

Joel: I think there are advantages and disadvantages to using the Olympic lifts and if you have an opportunity to work with a fighter for the long-term, then they definitely have their place in the training program. The main disadvantages are that majority of the force generated through hip extension is vertical and this is quite different from the rotational/horizontal nature of a great deal of combat sports skills and also they are technical lifts that take quite a bit of time to learn to do properly.

I think their best application is for the wrestling/grappling components of combat sports where explosive hip extension is used in takedowns and if I’m working with an athlete over an extended period of time, I’ll typically incorporate some Olympic lifting into their program. As a whole, I think the Olympic lifts are good tools when used effectively, I see them simply as one of many different means that can be used to develop explosive power and strength.

Sabina: Thank you Joel and we are looking forward to your upcoming seminars in UK


Joel Jamieson will be visiting UK for a series of seminars/lectures. Check out his website for details
www.8weeksout.com.
Posted by Sabina Skala at 05:10